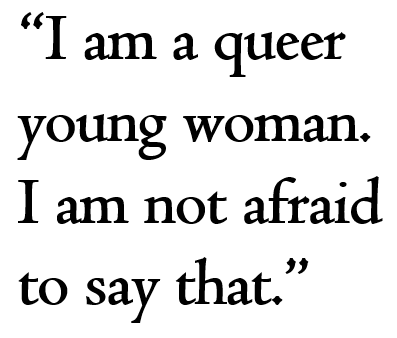 Last Sunday, June 12th 2016, a gunman murdered 49 people for a part of their identity that I share with them.

I am a queer young woman. In spite of everything, I am not afraid to say that.

The recurring fear among many LGBT+ people this week is not a hard-to-reach conclusion: “It could have been me.” Or, “It could’ve been my friends, my family, someone I know and love.”

I don’t share this same fear. I’m a teenager, not yet completely out, and as such, I’ve never been to queer spaces or hung out with queer adults.

I am a good person.

I am also a bisexual person.

In some people’s minds, these things are mutually exclusive. These people want me dead.

As a queer young woman who tries her hardest to look for the good in all people, this was, is and will always be a hard pill to swallow.

Those 49 people knew that too, or they thought they did.

They thought they were right, and good people, and safe, until someone took their lives from them.

I am young. I am not ready to die, and neither were they. Neither are any of us.

I know I am right. I’m trying to be strong. Everyone knows that we are sad. This is not enough.

Being right doesn’t make them any less dead. Being strong won’t bring them back. Being sad won’t erase from the survivor’s minds the haunting sound of the gunman’s laugh.

To those who want to question my identity:

My ability to love someone is one of two things: firstly, it is a part of me that is beautiful and pure and won’t be tainted by anyone’s hate or oppression.

Secondly, my ability to love someone is none of anyone’s fucking business.

Turnbull, Shorten, I’m talking to you:

Homophobes everywhere, this one is for you:

We are strong. We are brave. We are proud.

As much as we might be hurt and afraid, you haven’t won.

And if you think for one single second that hate will ever win, you are wrong.